About 7% of the United States’ electricity comes from hydropower, making it the country’s largest source of renewable power. Of the 80,000 or so dams in the US, fewer than 3% are powered: there is huge potential to use existing structures to reduce our carbon footprint by adding generating stations to these existing structures.

Humans have been harnessing the power of water for thousands of years and for more than a century, the technology for using falling water to create hydroelectricity has existed.

Learn More
Permanent Speed Droop
With no permanent speed droop on the governor, a unit that is paralleled to the grid would respond in one of two ways:

Utilities would find this type of governor control unacceptable, because they want to be able to predict what load each generating unit carries. It must be remembered that whenever the governor opens the wicket gates, load (Generation) will be added to the grid. The permanent speed droop characteristic of the governor allows the utilities to be able to predictably set the load level of each generating unit connected to the grid.

The other characteristic that Speed Droop provides when it is adjusted to any value other than zero is controlling the amount of the governor participation to frequency excursions that occur on the grid.

Permanent Speed Droop Defined
The magnitude of wicket gate movement, in response to system frequency changes or speed changer adjustments by the operator to adjust load, depends on the droop setting on the governor. Droop can practically be thought of as the inverse of gain between the speed changer position and the wicket gate position. 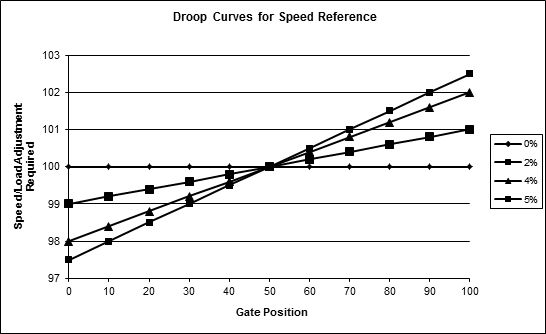 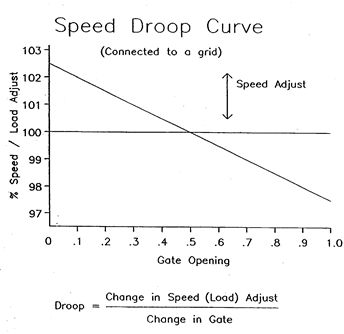 The above description of droop operation is based on setting up the unit off-line with the field breaker closed, droop at zero, speed changer at 100% and running at 60 Hz.

Checking Speed Droop
Droop is set with the dial on the front of the governor cabinet, and calibration of the dial is through either a turnbuckle link (Woodward Governors) or a slotted lever (Pelton Governors) behind the front of the cabinet. Most Woodward Gateshaft and “A” Actuators have adjustable droop cams which when fully open provide 5% droop. Usually percent of droop indication was not provided.

An easy check of droop calibration is to:

On some mechanical governors droop calibration and adjustment will change the speed-no-load position on the speed changer. With the unit off-line the speed-no-load setting should be established by setting droop to zero and the speed changer to100 %, and adjusting the floating lever connecting rod on Woodward Governors, or the pilot valve setscrew on Pelton Governors, to produce 60 hertz generator frequency.